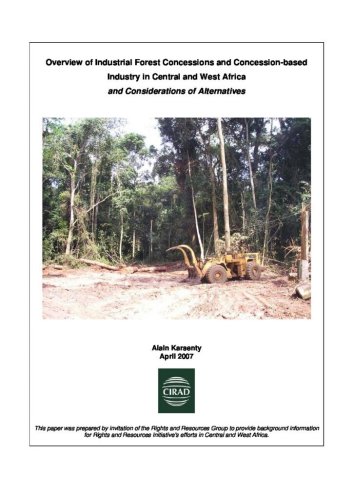 Concessions in Africa have a long history and mixed records. Initially, under colonial era, concessionaires were granted by Westerns Governments a given – and generally huge – area on which they received privileges to use natural resources as private assets, the trade monopoly on resources they gathered, and often the right to levy taxes and use hard labour. After the independences, the relationship between private actors and the State evolved into a more balanced one. From the 1980-90’s onwards, concessions were gradually requested to bear new responsibilities, previously carried out by governments, such as the management of production forests and the oversight of some parts of the territories where forest concessions are prominent. Today, concessionaire’s requirements are diverse, either technical (preparation of a logging plan, of a forest management plan following given norms and guidelines, commitment to perform specific tasks, etc), economic (building of a processing unit of a given size, creation and maintenance of road networks of local and regional importance), social (job creation in the logging area, delivery of goods and services to local administrations, authorities or populations, launching of “social” projects and social achievements for the local populations), fiscal (specific fees and taxes to be paid in addition to the general fiscal regime of companies and individuals), or environmental (including fighting illegal hunting and poaching inside the concession area).

Overall, concessions provide direct employment for around 135,000 workers in the selected countries of West (Liberia, Ghana, Côte d'Ivoire) and Central Africa (Cameroon, Congo, Gabon, DRC, CAR and Equatorial Guinea). The informal sector is likely to provide much more jobs in populated countries such as Côte d'Ivoire, DRC, Ghana, and Cameroon, according to estimates (more than 100,000 jobs in Cameroon, up to 15,000 permanent jobs in DRC and probably much more if one takes into account also the non-permanent jobs). One specificity of jobs provided by the timber sector is that they are among the rare jobs available in remote and economically marginalized areas (the forest zones), and which target non skilled people. It is estimated that one permanent job in Central Africa sustains the livelihood of 10-12 relatives.

The concession timber sector is a significant contributor to the Government budget, although the revenues derived from this sector look modest compared to revenues derived from oil. Forest taxes are totalling annually between $3.85 million for DRC to $40 million in Cameroon and up to $50 million in Gabon. In Congo-Brazzaville, forest taxes compare to theoretical oil revenues in proportion of 1 to 100. Recovery rates are still below the potential, but have improved recently in countries such as Congo and Cameroon. In terms of non-oil GDP contribution, the direct added value provided by the formal forest sector ranges from 3.2% in Cameroon up to 10 % in Congo (with 6.4 % in Gabon). Such information is available only in a handful of countries, and it is not expressed in economic terms (indirect added-value in transports not considered).